And was it really just our last review where we were chatting about Fort Wayne’s first farm to fork restaurant, and now we have a second one? Wahoo! We sure are living in a Golden age of dining around these parts. (Heh heh.)

The Golden, another highly anticipated hot spot opened up downtown earlier this summer, and we were eager to check it out. They don’t take reservations, but because we’re tragically unhip we showed up around 6:30 on a Saturday night and were seated immediately.

Located in the new Ash Skyline Plaza downtown, the space is gorgeous, although at times our table on the outside of the bar rail and near the host stand felt a bit infringed upon. Patrons standing in the bar area and another group waiting for a table were a bit too much in our space bubble.

Service was great. Our server Jordan was friendly and happy to chat about the menu with us. And midway through the meal when Beth launched her fork into the air, a passing team member immediately retrieved the one that hit the deck and fetched a new one. 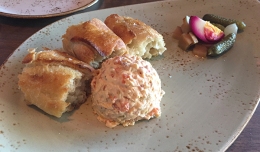 While contemplating entrees, we started with an order of the pimento cheese ($6), served with toasted sourdough and pickles.

Wendy: Is it just me or is pimento cheese all the rage lately? I’m not sure how that happened.

Beth: I can’t speak to the popularity of pimento cheese as I have not had it since 1973. However, the bread was crusty and delicious. The little garnish was tasty, too. I know it was garnish because I asked the server, just to make sure there wasn’t some intended blending of the cheese and pickled egg/pickles. There was not.

Wendy: It was a good starter. There was a disproportionate amount of cheese in relation to sourdough. At first I was going to say there wasn’t enough toast, but I actually think it was an overly generous scoop of cheese.

Wendy: For dinner I ordered the McGolden ($16), a burger featuring two beef patties, beer cheese, fermented cucumber, and dijonaise on a honey bun (“Shake your…honeybuns! Shake your honeybuns!” Sorry. I can’t say or think “honey bun” without that happening.), served with fries and really delicious ketchup. It was all super yummy, and I love that their portions are right-sized. Plenty of food, nothing excessive.

Beth: I chose the salmon, which was AH-mazing. It was served over a zephyr squash puree, zucchini-goat cheese risotto, porcini mushroom conserva, squash with asparagus. It was the best piece of salmon I’ve had in a long time — perfectly prepared. The puree was fab-o, too. The menu changes frequently, so this particular offering may not be available and if not, too bad for you. I can’t remember the price, but it was on the high-end.

Wendy: Beth, thank you so much for letting me have a taste of your dinner, and then another, and maybe even another. It was so good, as much as I enjoyed destroying my burger, I might’ve had a little bit of food envy going on.

Sweet biscuits with strawberries and cream

Wendy: Beth was being super good, but I was all in and went for dessert. I had the sweet biscuits ($6) served with strawberries and vanilla cream. Mmm….it was so tasty. I could not stop eating the biscuits.

Beth: Speaking of food envy, who wouldn’t have it when that bowl of heaven showed up at our table? Due to health issues, I am watching my carb intake and would rather use them on my entree. But still, my mouth is watering as I write this.

So what’s the word?

Wendy: “I’ll have what she’s having.” After dinner we ran into a friend who asked me which was better, The Golden or Tolon. Why do I have to pick just one? Isn’t it fab that we actually have choices in new, innovative, delicious restaurants around town? I love the creative, challenging menus that get people out of our ruts and comfort zones. And, AND, The Golden is serving Sunday brunch – sign me up! I cannot wait to go back and check that out.

Beth: “I’ll have what she’s having.” I’m not quite as enthusiastic as Wendy, but I’m all in for The Golden. I don’t like to compare restaurants — they have their strengths, weaknesses and good days and bad. However, I have lived in Fort Wayne for a half century now, and am happy to say that we finally are getting the caliber of restaurants that until recently only existed in Indianapolis and Chicago. Hooray for The Golden! Hooray for Fort Wayne! Okay, I’ll settle down now.